Evan just found this choice link about me so I did a bit of googling to see what else I could find down on memory lane. I’m the answer to a question which is pretty cool. Here’s the story…

Back in the day Bungie made a game called Myth. Evan and I heard about it somehow and started playing it as Trout and Fly Molo. I remember it as the first game with centralized internet play and as a strategy game without all of the gold mining and wood chopping.

As teenagers with nothing better to do we got hooked playing it on a beast of a PowerCenter 180. Evan was 16 and probably should have had better things to do, and eventually he did and started playing it less. In the meantime, I joined a group called Civil Order and was an official geek. I think that Evan was in civil for awhile too but don’t remember exactly.

So here’s my real claim to fame. In 1998 they had a Valentine’s Day tournament with the sweet prize of a trow statue. I ended up winning the first few rounds, but the final rounds were scheduled for a weekend that I had a swim meet down in San Diego. My order mate Sorcha Payne who I had beaten in a previous round stepped in for me and played the rest of it out. The final round was on some new map devised for the tournament with a big tree in the middle and she ended up mopping the floor with everybody. 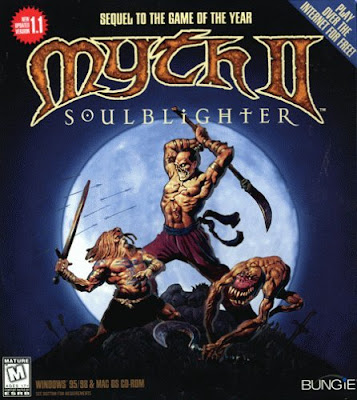 A few weeks later my dad took me to Mac Addict (where she worked at the time) to say hi and pick up the sweet trow statue from her. Of course, I was a socially awkward 14 year old and basically clammed up and basically ran back to the truck, ridiculous statue in hand. After that whole thing I ended up working on the map editor for Myth II and wrote some of the documentation for it. I kept playing Myth for a few more years but became a little bit out of the loop around 2000ish.

I think that Sorcha Payne’s real name was Kathy Tafel and she works at Apple now. Here’s an interview with Kathy from 2003. I still have the trow statue around to guard the front door at night.

I used to be a video game fiend but these days the most I do is play the Nintendo DS occasionally. Reading on Wikipedia they had a tournament as recently as 2006 which is pretty nuts. This November would be the 10 year anniversary. I wonder if bungie.net still works?