We were visited by a marsupial last week. I was sitting in the office and Lola was out in the backyard when I heard her bark once. It was strange, because she’s either silent or barks psychotically when a squirrel runs by. When I got out there, she was alternating between barking at a pile of fur on the ground and cocking her head at it. I chased her away from the animal and then brought her inside before trying to figure out what was going on.

The furry mound turned out to an opossum playing dead. I’d bet that it was looking for food in the yard when I had suddenly opened the office door for Lola and it didn’t have time to get away. Not being sure whether it was dead or just pretending to be,  I watched it for awhile but could luckily see it’s eyes moving. When we went out in the morning to check on it, it was gone. 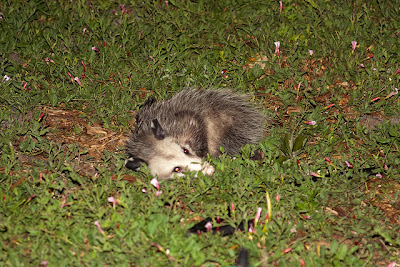